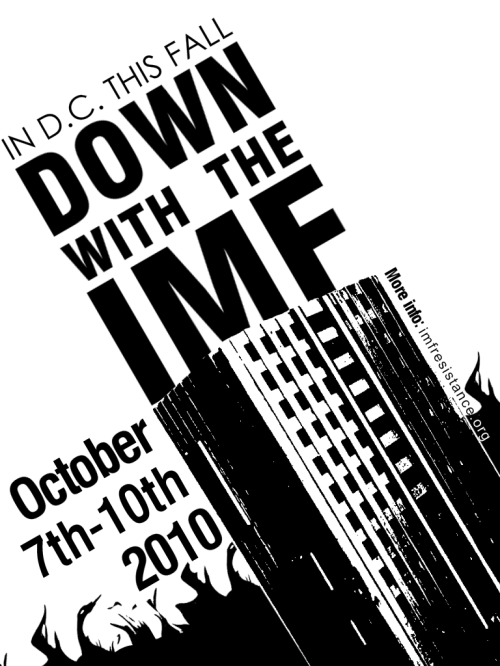 Some of the Scheduled Events:

An idea whose time has come: Climate Camp 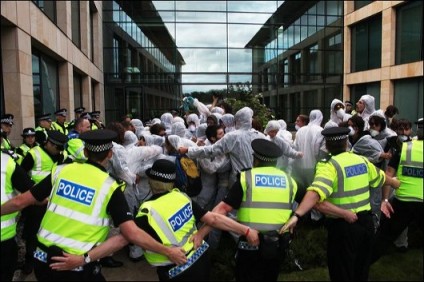 via About Us » Camp for Climate Action.

One of the things I particularly like about this group is its focus on the corporate criminals responsible for so much of what is creating climate change.

Read This: Who’s afraid of the nuclear bomb?

Just shy of my sixth birthday when the Berlin Wall fell on 9 November 1989, I have no memory of ever being aware of the danger of imminent nuclear attack. For my oldest brother Seb, born in 1968, things were very different… (via Comment is free | guardian.co.uk.)

Posted in Read This

Web2.0 and Labor1.0 – and a Call to Action on the Millennium Development Goals

Over the past couple of months I’ve been writing sporadically about what I’ve termed “Labor2.0” – that is, the grimy world of work, of labor, that lies underneath the glossy surface of our Web2.0 world – of World2.0 – or maybe we should say Capitalism2.0 (except it feels like we are up to version 3 or 4, at least, on that).

In my first couple of discussions of the topic, I focused on systems like Amazon’s Mechanical Turk and other forms of content creation that seem exploitative in the labor practices they involve – ranging from Mechanical Turk’s digital sweatshop to the unpaid work that we all seem happy to do for large media corporations to the expropriated labor that formed the basis for GraceNotes and IMDb.com.

More recently, in my discussion of toxic exposure in a Chinese factory assembling components for, among other things, Apple iPhones, I tried to highlight the linkages between the world of Web2.0 and much more traditional forms of exploitation and violence, in the way that the supply chain that produces our goodies has its beginning in often appalling working conditions.

Here’s a reminder that Labor1.0 – the Dickensian world of child labor in primitive factories – is still very much with us:

Sweatshop girl ‘has no choice but to work’: As part of a series assessing whether Bangladesh is on track to meet the UN Millennium Development Goals (MDGs) by 2015, the BBC’s Alastair Lawson visits a safety pin factory in the capital, Dhaka, which employs children

The electricity supply in the sweatshop in the crowded part of old Dhaka where Asma, 10, makes safety pins for a living is so dangerous that the foreman can only turn on the lights using a broomstick.

“If I use my hands I may get an electric shock,” he explains.

Of course they are not perfect, and are full of compromises, but they do represent a real attempt to come to grips with problems like poverty and hunger, underdevelopment, climate change and the status of women.

There’s a conference – a summit – being held at the UN in September, and I would love to see a demonstration there, a gathering of radicals from around the world such as we see at G8 and IMF meetings. Not to enact a violent refusal, though, as is done at those events, but rather to articulate (qualified) support for the Millennium Development Goals; to demand that world governments live up to the commitments they’ve made to take steps against poverty, hunger, disease and climate change; and to put forward visions for even more radical “development” goals, for transformation goals.

With only five years left until the 2015 deadline to achieve the Millennium Development Goals, UN Secretary-General Ban Ki-moon has called on world leaders to attend a summit in New York on 20-22 September 2010 to boost progress towards the MDGs.

Let’s tell them what our millennium goals are, show then our vision of globalization, of a world for people not profit. Let’s “make poverty history” for real – not with t-shirts, wrist bands and pop concerts, but with real social change.

via Demotix.com | The Street Wire.

Demotix has useful and interesting coverage of the unrest in Greece, and an RSS feed you can use to keep updated.

“Nike is proud sponsor of this year’s Athens riots and protests.”

Actually, official sponsors for riots is not a bad idea.

Back in the day, we tried to get an Australian brewery to sponsor our squats – for some reason they declined. Funding and supplies are always an issue for squats and demos and so on, but sponsorship might provide an answer.

Sadly, up till now, only the other side has ever been able to get any real sponsorship or support – mostly from the military-industrial complex…

Another round up of recent headlines, ledes, blog posts and soundbites from around the internet on the situation in Greece…

END_OF_DOCUMENT_TOKEN_TO_BE_REPLACED

Crisis in Greece – with Statement on Bank Deaths

Another roundup of news articles and blog posts on the situation in Greece, with particular attention to the deaths in the bank fire… Obviously, there’s a vast amount of material out there, far more than I could ever repost/link to here. I’m trying to select significant articles from mainstream, but not too bad news sources along with useful inputs from left perspectives – but basically what you are getting is what I read that I found helpful, enlightening, provocative or enraging.

Debt crisis: The EU is waterboarding Greece | Poul Nyrup Rasmussen: “The austerity measures forced on to the Greeks are not only unfair, they set a bad precedent for the rest of Europe

On the day of the eurozone leaders’ meeting in Brussels, it is essential that we look at what is really going on in the European Union. The Conservative majority in the EU has again lost sight of the big picture. Its punishment of Greece is like the nation-state equivalent of waterboarding….”

Greece Riots as Seen on Twitter, YouTube: “As riots explode in Greece, pictures and videos are flying around the social web, shared from news sources and folks on the ground. The images and videos we’re seeing are nothing short of otherworldly and terrifying. Riot police don gas masks, violent protesters take over the streets, gun shots ring out and open flames burn in the streets.

Readers should be aware that some folks may find the content below, particularly video content, shocking, disturbing or offensive. Please keep this in mind when you decide whether or not to watch these videos.”

“The management of the bank strictly barred the employees from leaving today … while they also forced the employees to lock up the doors” – Statements on the deaths in Athens: “Following the deaths of three workers in a fire at a bank in central Athens yesterday, we reproduce for reference the statements of a worker at the Marfin bank on the incident, and the communiques of the bank workers’ union OTOE and the Skaramanga squat in Athens. The bank workers union struck today in response to the deaths, blaming the goverment and employers for the fatalities.

The statement of an employee of the Marfin bank on the deaths:

Quote:
‘I feel an obligation toward my co-workers who have so unjustly died today to speak out and to say some objective truths. I am sending this message to all media outlets. Anyone who still bares some consciousness should publish it. The rest can continue to play the government’s game.” more

The police brutality seen on the streets of Exarcheia last evening after the end of the general strike protest march in Athens has been unprecedented and casts serious doubts on the nature of the present regime in Greece which is casting away its democratic veil to expose itself as what it really is: the continuation of the colonel’s junta.”

What do we honestly have to say about Wednesday’s events?: “What do the events of Wednesday (5/5) honestly mean for the anarchist/anti-authoritarian movement? How do we stand in the face of the deaths of these three people – regardless of who caused them? Where do we stand as humans and as people in struggle? Us, who do not accept that there are such things as “isolated incidents” (of police or state brutality) and who point the finger, on a daily basis, at the violence exercised by the state and the capitalist system. Us, who have the courage to call things by their name; us who expose those who torture migrants in police stations or those who play around with our lives from inside glamorous offices and TV studios. So, what do we have to say now?

(via After the Greek Riots › Irregular updates and articles on the situation in Greece, in English.)

Greece at the Brink of the Abyss

Lots of attention to the protests, but also an increasing sense that the bailout so far approved will not be enough for Greece, and that the financial problems may yet extend to other countries in the eurozone. Meanwhile, it is still difficult to find serious, indepth discussions of the austerity measures from the perspective of the average Greek.

A story has also been circulating that the country’s financial problems could be substantially ameliorated by getting tax evaders to pony up their fair share – such as 1000s of swimming pool owners in Athens. But other articles dispute the value of this as a solution.

Regarding the protests, there are the usual responses in the news media – some decrying the violence of anarchists and young people, others dismissing the protests as insignificant. But when the protesters are farmers, civil servants and school teachers, it is clear that this is not just a case of student radicals always ready to leap to the barricades, that something significant is indeed going on. Particularly when the President of the country describes it as “at the brink of the abyss.” But his abyss might be your threshold, a path to a different future.

Hopefully, we will soon see articles from more mainstream but progressive news outlets gaining traction with stories about what is really going on – both with the protests, and with the attempts to rescue the Greek economy. In the meantime…

END_OF_DOCUMENT_TOKEN_TO_BE_REPLACED

“This past weekend rallies were held across the country protesting Arizona’s new immigration law. So what does that mean for you? A new batch of protest signs, of course! Enjoy.”

(thanks to Boing Boing)

“The biggest international bailout ever” – more on Greece

A round up of recent headlines, ledes and soundbites from around the internet on the economic bailout of Greece, austerity measures that are being suggested, and social fallout…

END_OF_DOCUMENT_TOKEN_TO_BE_REPLACED

May Day Marches and Protests

Just a tiny sampling of bits and pieces from around the internet on this year’s May Day marches, protests and riots… 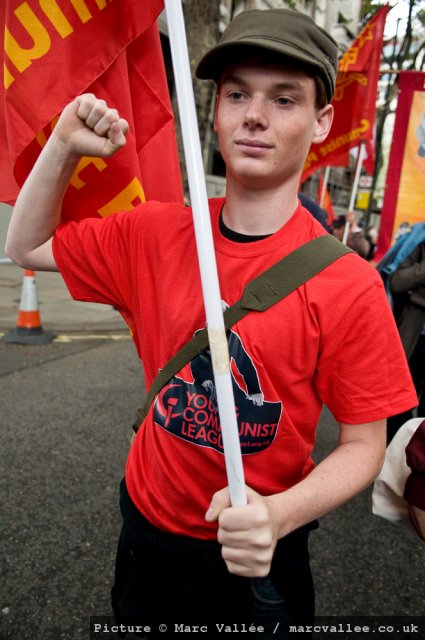 END_OF_DOCUMENT_TOKEN_TO_BE_REPLACED

“By night Berlin has become a battlefield. Each morning reveals new casualties: burned out cars. There have been over 500 in the past three years. These nocturnal arson attacks are part of a protracted campaign of resistance to the city’s increasing gentrification, retaliatory strikes against the loss of areas of the city that have long fostered alternative culture and anticapitalist activity. As more and more residents are priced out of their own neighborhoods, such acts of sabotage have become the last-ditch efforts of the dispossessed…”