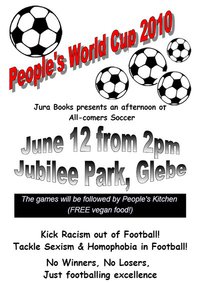 In the shadow of corporate funding and overt attempts to deny the game’s multicultural and working-class history. In opposition to racists and sexist attitudes within and surrounding the game. Jura is organising a match to reclaim football (yes, we mean soccer). A football match like no other you have ever been a part of. A match that will borrow and adapt anarcho-football rules and style of play, with any player able to substitute back for either team without formal restrictions on substitutions. And naturally it will not be gender restrictive, encouraging all to play! The general theme of the event will also aims to subvert the primacy of nationalism and patriotism during the Men’s World Cup period.Come join the Jura people and the anarchist community in a football kick around within an anti-racism, anti-sexism setting. Jura will also organise a people’s kitchen on the day.

Anarchist football is a regular feature of North American anarchist bookfairs – and always a highlight, a pleasure, a joy.

The big news of the day was obviously the events in Iran. It’s always encouraging to see people taking to the streets – and the size of the demonstrations in Tehran (estimated at 100,000 to more than half a million, depending on what source you looked at) along with the government’s obvious unwillingness to crack down hard (despite the seven deaths one death) are particularly encouraging. END_OF_DOCUMENT_TOKEN_TO_BE_REPLACED